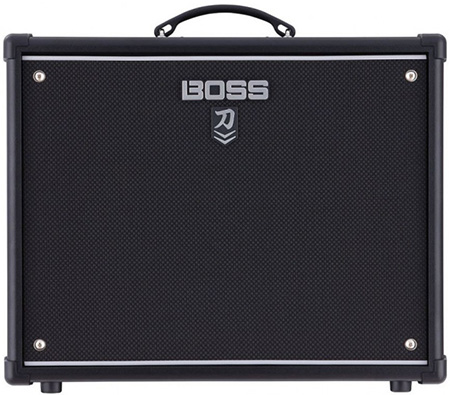 The brand new and updated Katana 100 MkII picks up where its first generation model left off, building on the same core tones and features that have made the series such a worldwide success. If you loved the original Katana amps, you'll love Katana MkII even more. And if you're new to the party, get ready for sound, feel, and versatility that soars far beyond its price class. You now have dual voicing on each amp preset meaning you have doubled your tonal variety. This gives you two options of Acoustic, Clean, Crunch, Lead & Brown. The Katanas can handle whatever genre of music you can throw at them whether you are a Jazz, blues or metal player there are tonal options built-in to suit everyones needs.

One downfall of the first line of Katana amps was the fact you could only run 3 effects at the same time meaning you couldn't run both a booster and a modulation effect or a delay and wah simultaneously. Boss have taken this feedback from customers and implemented this idea to allow you to run 5 different effects at the same time! The newly designed dual pots allows you to dial in up-to 5 effects without the clutter of extra knobs or switches. Booster, Mod, FX, Delay, and Reverb sections also have 3 different variants to choose from as well as additional effect in the Tone Studio which can be loaded in and saved in your presets with ease.

True tube tones whatever the volume

Backed by BOSS's Tube Logic approach, Katana 100 MkII delivers the authentic output distortion characteristics of genuine tube amplifiers, with the sound and feel becoming richer and more responsive as you turn up the volume. But unlike that classic tube amp, Katana MkII's variable Power Control makes it easy to fly in the sweet spot without getting fired from the gig or kicked out of the house. Just throttle back the overall volume as needed to enjoy inspiring, cranked-amp sound anywhere you play, from bedroom to stage.

The Katana 100 MkII is a fantastic sounding amp in its its own right and can deal with most situations you can throw at it, however you also now have the option to use the Katana as your own powered cabinet! If you have a separate preamp, multi-fx, or modeller the Katana has a power amp-in socket on the back which bypasses the Katanas preamp section and effects and taps straight into the built-in tube logic power section with full control over the power control. Linking it up with the Tone Studio also allows for further editing to suit your rig such as overall EQ control, high pass filer control and adjustable gain.

Save & recall Tones on demand

One of the fantastic features which makes the Katana range so popular is the ability to save and recall all your favourite tones which you have created. Within the Katana 100 MkII model you have 2 banks of 4 presets which you can save and recall at any time either by the press of a button or a footswitch. This is then expanded via Tone studio where you can save multiple presets to recall and save into the amp as and when via your computer.