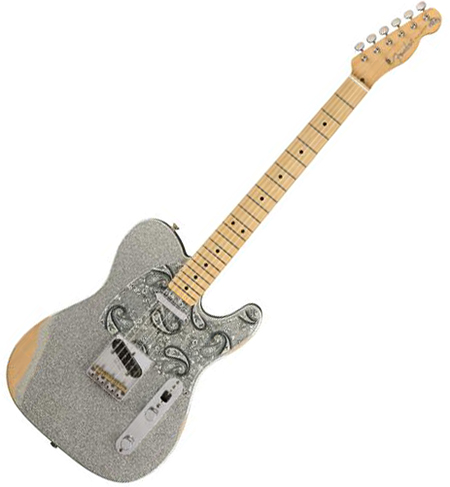 Anyone familiar with the Nashville country-music scene will know the name Brad Paisley, however for those who aren't let me give you a brief rundown on him: the man has sold over 12 million albums, won three Grammy Awards, 14 Academy of Country Music Awards, 14 Country Music Association Awards and two American Music awards. Not only that, but he's even written songs for Pixar's "Cars" franchise of films - to say he's a big deal would be a huge understatement.

An acclaimed superstar of modern country music, Brad Paisley has defined a guitar-centric sound infused with the voice and vibe of the Telecaster. We've teamed up with this award-winning guitarist to create his signature model, the limited-edition Brad Paisley Road Worn Telecaster. An eye-catching instrument with plenty of country mojo, this stage-tested Telecaster is ideal for adding some Nashville flair to your arsenal.

The Brad Paisley Telecaster isn't your normal Standard Telecaster, The custom Paulownia body sports a spruce top and back, creating a very lightweight instrument with an acoustic-like resonance to it's tone, this means the guitar is not only a lot lighter making it easily the most comfortable Telecaster out there but the added benefit of the acoustic resonance allows you to feel the vibrations through the body. Joined to the body we have a maple neck & fingerboard, The neck is contoured to Paisley's custom neck profile the "Enhanced V" which rounds out higher up the neck, making it great for chording or soloing. matched with a 9.5" radius fingerboard with medium jumbo frets the neck can easily cater for for big bends and fast playing. To finish this stunning guitar off we have The Road Worn Silver Sparkle lacquer finish and aged hardware which gives this Tele a "broken in" look and feel.

Approved by Brad Paisley himself! In the bridge position we have a custom-wound '64 Tele single-coil bridge pickup giving you Bard's iconic tone with an extremely clear and vibrant tone, paired with the most popular telecaster pickup to date the Twisted Tele pickup in the neck position, this allows the guitar to offers a versatile pallet tones to power your playing.