**We Are Fully Open - Instore and Mail Order** 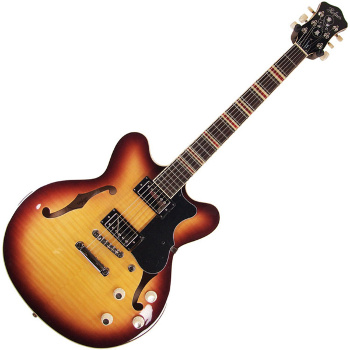 The HCT Very Thin has a lovely warm tone on the neck pickup, despite the reduced mass of wood in the body, perfect for blues and jazz. But switch to the bridge pickup and youve got a powerful treble sound to beat a 335 when doing indie music.

Master violin maker Karl Hofner founded his own stringed and fretted instrument company in SchÖnbach, Germany in 1887. With a reputation for quality, craftsmanship and innovation, Hofner soon became the largest manufacturer of stringed and fretted instruments in Germany. Thus, in 1907 Karl Hofner was entrusted with the repair of the violin of the Saxon King, and the master performed his job to the full satisfaction of his client. When his two sons, Josef and Walter, joined their fathers company in 1919 and 1921 respectively, acoustic guitars already represented a significant part of Hofners instrument production. In a market dominated by inexpensive student guitars during the 1920s and 1930s, Hofner guitars were already establishing new standards and the company capitalized on that leadership during the decades that followed.