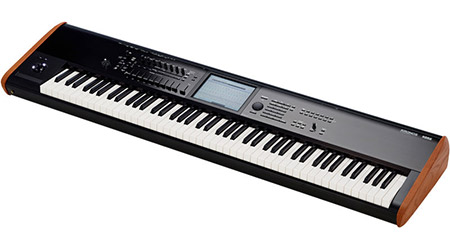 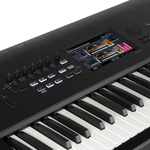 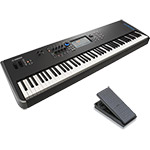 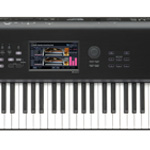 The Kronos 2 88 a versatile creative tool for live, studio and production work. Korg have expanded the original Kronos/ KRONOS X by adding brand new libraries of sounds making the overall sound library approx. 21Gb as opposed to the original 12Gb. On top of this are a range of new operational features such as a new set-list mode with coloured boxes for easier viewing, transpose control, text adjustment features and more. The system now also support drag controls on the screen so if you need to move a fader or adjust a value it is possible to adjust them using touch and drag on the screen.

Out of the box the KRONOS-2 88 is like a complete studio in one unit with the feel and response of a real piano by way of the RH3 (Real Hammer) action. It comes packed with features such as 16 track MIDI sequencer and 16 track Audio sequencer, high quality effects processing with up-to 16 simultaneous effects, large TFT touch screen display, 61 velocity and aftertouch sensitive keys, 62Gb SSD drive for storage and sample playback, full in-built sampling and playback system with editing, nine different sound engines and in-depth control for live and compositional work.

The Kronos-2 88 is not just a single sound engine but a collection of 9 high quality dedicated sound engines with a mammoth 21Gb collection of sounds stored on super fast SSD storage. These sounds are designed to offer maximum flexibility and audio quality based around the instrument they are emulating.

Korgs sampling system makes light work of creating custom sounds. The rear panel of the KRONOS-2 88, has 2x balanced line inputs perfect for recording for mono or stereo instruments, microphones and more. The input can be recorded live from another instrument and instantly modified using in-deoth sample edit parameters including truncate, trim, looping and more. The recorded samples can then be assigned to your selected range of keys to create your own custom voices. The samples can also be layered for velocity switching and creating special effects.

The KRONOS-2 ships with approx. 2Gb of free memory for sampling into but, unlike other devices where the RAM is the limit for the sampling, KRONOS has a trick up its sleeve - SSD streaming. What this means is the main portion of the sample can be held on the SSD drive whilst just the initial snippet of sound is needed in the RAM memory to start the sound off. With the memory usage being so low it means the KRONOS is unmatched with how many samples and sounds can be loaded into the system at once making this the ultimate sample playback instrument.

The new KRONOS-2 88 drag feature is a welcome addition to the new OS. Virtually any parameter on the screen that has a value or can be adjusted can be modified with the drag feature. Using the touch of a single finger its as easy as touching the parameter to be modified and then dragging your finger up and down to adjust the value. volume faders, sound edit parameters, values and more can be modified very quickly. When using something like the Ms-20EX sound engine it is even possible to touch one of the connectors on the virtual panel and drag across to another in order to cable together the connectors on the screen. It is even possible to open/ close the lid of the piano by dragging the lid with your finger.

Korg KRONOS-2 88 is packed with incredibly powerful and feature-rich sequencing and composition tools for recording your musical masterpiece. In-built is a 16 MIDI track and 16 audio track sequencer with in-depth editing capabilities. Furthermore is the KRONOS-2 links seamlessly with a computer DAW system for the ultimate in control and sequencing capabilities.

The 16 track MIDI sequencer has had many improvements over previous KRONOS models and of course contains all the tools needed for recording, editing and mastering your songs. Each of the MIDI tracks can use any of the individual programs from the KRONOS-2 88 sound banks plus up-to 16 simultaneous effects per song (12x IFX, 2x MFX, 2x TFX). It is also possible to instantly transfer an entire Combi setting into the sequencer including its drum track and KARMA settings for instant recording when inspiration hits. Each track now has its own signal level indicator on the screen for quick reference to which tracks are playing and their levels. With the new drag capabilities it is easy to adjust each individual tracks level on the screen or use the dedicated control panel to the left of the KRONOS-2 88 main top panel.

The sequencer has in-depth editing and creation tools. For example, it is possible to copy, paste, duplicate, erase and even modify down to individual note level on each track. These features commonly found in DAW systems really help with composing your songs. If you make a mistake during a big take it is no problem, you could punch in and out of that section with a new recording over the top or simply modify that single note mistake using the note edit list. If you are wanting to start a fresh song and not sure what sounds to choose then use one of the in-built song templates which sets the sequencer ready with a selection of appropriate sounds for the selected style of music. It will even give you a drum track to play along with.

The new OS 3.0 also adds the ability to modify a program sounds straight from the sequencer screen. By holding the ENTER button and selecting a track on the screen you will be able to modify the selected tracks sound in real-time and even whilst the sequencer is playing to hear the changes that are happening. You could then store this sound as your own and go back to the sequencer where your new sound is selected and in use.

As well as 16 MIDI tracks there 16 audio tracks which also utilise the KRONOS powerful effects system. It is possible to record an instrument direct in to the audio track in real-time or simply import an audio file you may already have. On the rear panel of the KRONOS are balanced audio input for connection of a microphone, guitar or other instruments with audio connections. When plugged in, the KRONOS-2 88 will record the instrument audio signal direct to the internal 62Gb SSD drive at high quality. When finished, you can hear the result of your recording and even process the audio through additional effects such as the amp simulators, reverb, delays and more. Audio can also be edited using the classic sampling style tools. When your song is ready for completion it can then be saved as is tot he SSD or USB/ external HD and can even be mastered down to a master 2 channel stereo .wav file.

With all the latest technology, Korg have also updated the outside of the KRONOS. Fresh for 2015 Korg have modified the case in a few ways. New wooden end panels are stronger than the original KRONOS plastic panels and adds a nice elegance to this modern instrument. The screen also gets a new surround whilst the rear top panel is now a perforated style metal which may aid with product cooling as well as its appealing looks.