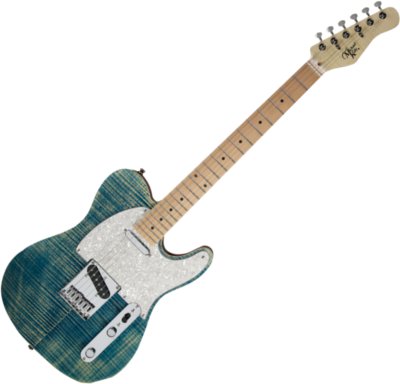 Just the right amount of vintage magic makes the 1953 the choice for those that are seeking a more traditional instrument. The traditionally voiced neck pickup is complimented by a stacked single coil in the bridge that switched between a vintage single coil and a fat humbucker tone. The 1953s all-Alder body is capped with flame maple and a Maple fingerboard. Traditional has never been more evolved.

We as a shop have been selling Michael Kelly guitars since 2007, impressed by the looks, tone and versatility of their centrepiece model, the Patriot Custom. Since then it has become our best-selling guitar above any other brand. To say we recommend Michael Kelly guitars would be a huge understatement. We regard them as the best value instruments money can buy, but even price aside, the quality of build and finish, and pure tone is enough for most players to be instantly sold.

This new vintage 1953 model from Michael Kelly, along with its brothers and sisters in the 50s series, has breathed new life into the range, and invites a whole different breed of players into the mix. If our experience with Michael Kelly has told us anything, its that these are going to take the guitar world by storm - theyre offering up devastating looks and smashing guitar tone for a fraction of the price of an equivalently specd model from one of the big companies, and in finishes rarely seen even at the £1000-mark, never mind well under £500 notes. Worth serious consideration no matter what level of player you are - youre sure to be happy with the Michael Kelly 1953.

Inspired by the vintage finds of the golden era of electric guitar making, the 1950s Series offers features and sonic capabilities of those memorable instruments but with modern day appointments and production techniques. All five models feature an exotic wood top and contoured arm cut, master volume and master tone controls, a three way pickup selector, and coil taps for sonic range and versatility.