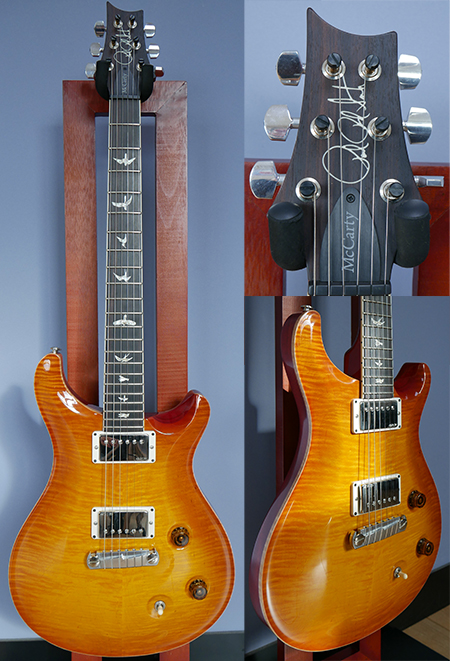 This McCarty guitar has been supplied B-Stock direct from the supplier and as such may have very faint marks or signs of use. If you would like any further information or some images of any marks then don't hesitate to contact us.

The PRS McCarty model pays homage to a legacy of innovation. As the President of Gibson during a true golden era of guitar building (1950-1966), Ted McCarty was a pioneer of the electric guitar and musical instrument industry. In the late 1980's, Paul Reed Smith called on Ted to consult with him on guitar design and production techniques. He not only served as Paul's mentor but became a great friend of Paul and everyone he met at PRS. In 1994, PRS released the first McCarty, an instrument that incorporated the full spectrum of techniques and knowledge Paul had gained from Ted as well as his own experiences as a guitar builder. It is in honor of Ted McCarty, his knowledge, his friendship, and his memory that PRS reintroduced the McCarty model.

The McCarty Guitar is cut to the traditional double cut shape, made up from high quality mahogany and topped with a stunning carved figured maple cap. However this model differs from your standard Custom 22 model as the body is slightly thicker giving you more resonance and a greatly enhanced sustain. Joined to the body you have a mahogany neck spanning a 25" scale length, and cut to a PRS pattern neck shape which fits comfortably in your hand. A top of the neck you have a stunning bound rosewood fretboard fitted with 22 frets and the iconic bird inlay design PRS are known for.

The new McCarty model comes fitted with a set of the fantastic 58/15 pickups, these pickups were designed closely with the widely popular 85/15's. The 58/15's are more of a vintage voiced pickup with exceptional clarity and a very focused mid-range. As far as pickup options go this model is fitted with a 3 way toggle switch to swap between pickups as well as a push/pull toggle switch on the tone control to add a coil-tapped sound into your tonal options.