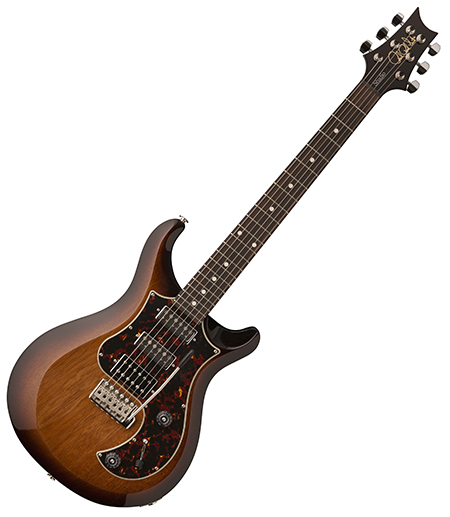 What PRS have to say:

This versatile setup allows for a whole new scope of sounds that are only possible with a three pickup guitar, whether you're looking for punchy singlecoils, vintage scooped tones, or the chunky kick of a bridge humbucker (that can still be split to singlecoils via the push/pull tone knob for a three single coil set up). With seven combinations in all, the S2 Studio covers classic tones but maintains a unique voice making it a perfect "desert island" guitar. The S2 Studio comes in five striking colors: Antique White, Black, and McCarty Tobacco with Tortoise Shell pickguards and Frost Blue and Frost Green Metallics with Mint pick guards.

Consisting of a solid Mahogany body allowing for a warm and sustain-filled tone to suit any genre and style, 22 fret, 25" scale length mahogany neck with a traditional rosewood fretboard, dot inlays, PRS patented molded tremolo bridge, PRS Low Mass Locking Tuners, gig bag. This combination has been tried and tested for years and proven to be one of the best combinations of woods for the gigging musician.

The S2 Studio comes fitted with a Starla treble pickup allowing for vintage voiced humbucker sounds to cover a wide variety of tones for any situation, fitted with a push/pull coil tap system you can also get the sparkly single coil bridge sounds to help cut through the mic with ease. The humbucker is paired with 2 Type-D Singlecoils allowing for the classic middle and neck position single coil tones we all know and love. All controlled by a 5-way blade pickup selector allowing for a mass of tones all in one guitar.