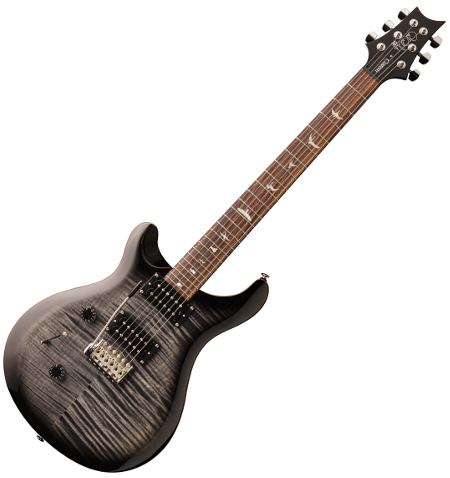 The PRS SE Custom 24 is the quintessential SE instrument, designed to faithfully reflect the PRS model that started it all. The PRS SE Custom 24 Lefty brings classic PRS playability, reliability, and vibrant tone to the left-handed players of the world. Gig-ready and studio sound, this model keeps all the same foundational specifications that made the SE Custom 24 so popular and gives the same benefits to left handed players everywhere!

Used by a mass of professional guitarists all around the world the Custom 24 has become one of the most poplar guitars of today. This is down to the fantastic build quality, mass variety of tones, fantastic appearance, and overwhelmingly good prices. All PRS guitars are build to to be the best guitar for your money at that price and this is truly shown in the SE series.

The Guitar is Made up of a mahogany body and neck that are glued to give you a fantastic resonant and full tone which gives the guitar a fantastic starting point on its tone. The neck has a rosewood freeboard, is 24 frets allowing you for that extra if it is needed, and spread across a 25" scale length for optimum comfort. The neck contour is a wide and thin profile which different from the other prs models giving you a losing grip for a faster and sleeker movement in your hand on the fretboard. To top it of the guitar has the Paul Reed Smith bird inlays up the neck, either a flamed or quilted maple top and bound body and fretboard to give the guitar the fantastic look it is known for.

The guitar comes Fitted with SE versions of the PRS 85/15 pickups which are made to be as close to the USA pickup set as possible but to a budget to keep the guitar at an affordable price and they sound amazing for the price. with the addition of the mahogany construction, smooth playability the coil tap feature allowing you to split the hum buckers to sound like single coils this guitar really does have it all and can produce a massive variety of sounds which can fit into any genre of music you could think of playing, This is what makes the custom 24 such a poplar guitar.