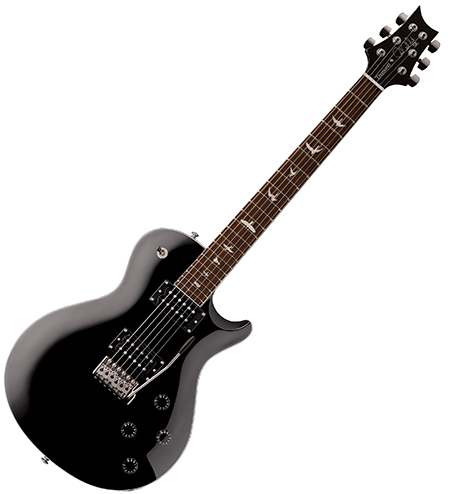 The PRS Mark Tremonti Standard has a powerful voice that is well suited to heavy rock rhythm playing and melodic, soaring leads. The Tremonti "S" pickups and dual volume and tone controls allow players to dial in a wide variety of tones, never losing this model's signature articulate aggression.

The SE Mark Tremonti Standard has an all mahogany body giving the guitar fantastic sustain and a warm, vibrant tone. Paired with a maple neck and rosewood fretboard allowing for a lighter feel to the neck making it extremely comfortable play whether you are stood on stage or sat at home. As with Tremonti's guitar this SE Signature model sports a Wide-Thin neck profile which allows for fast movement up and down the neck. Fitted the bod is an up-routed Tremolo rather than the hardtail usually fitted on PRS single cut models allowing for anything from light tremolo to full on dive bombs.

The guitar comes fitted with a pair of 'S' Tremonti humbucker pickups, these have been voiced and designed closely with Mark to create a tone which works for him at a budget price without compromising on tone or build quality. Controlled by a 3-way selector switch, two independent volume and tone controls, this allows for a mass tonal options without losing Mark's signature articulate aggressive tone.