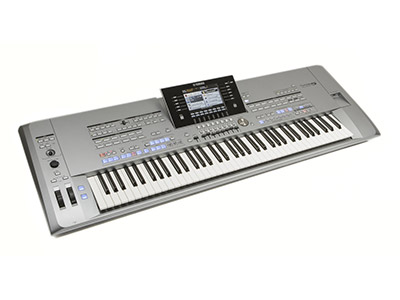 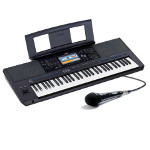 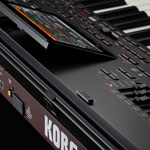 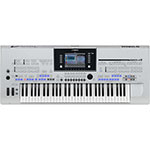 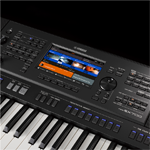 Tyros5 is now discontinued the item being offered for sale is pre-owned. The picture is a standard Tyros5 picture not the one for sale. We are careful to confirm condition with you before you purchase. Nearly all keyboards that we trade in are in excellent condition and if they are not we will make a point of describing any wear. 12 months warranty is standard on all hi value pre-owned instruments over £1000

The Tyros5 features Vintage, Home, Euro, Concert, and Theatre organ Voices, all superbly reproduced with stunning samples that allow the Tyros5 to shine in any situation that an organist might encounter. With features such as a comprehensive set of realistic organ-style controls, adjustable effects, and intuitive operation that allows you to alter the sound in real time while you play, Organ World is sure to meet the demands of the most demanding performer.

Ensemble Voice is an amazing new feature that reproduces true divisi playing in a section. In the past, a Voice like Brass Quartet would use a sample of four players, which sounded great. However, if you played two notes youd get eight players, which could sound great but isnt the most realistic. Tyros5 Ensemble Voices always get the same number of players because Tyros5 has the musical knowledge of a professional music arranger. Play two notes with a Brass Quartet Ensemble Voice, and Tyros5 will send the trumpets to the top notes and the trombones to the lower notes; its an incredibly realistic sound.

Ensemble Voices also utilize parameters which enliven the performance to reproduce the subtle variations in timing heard in a real ensemble. This provides an authentic sound that sounds as if a group of actual performers were playing and allows you to enjoy playing like an instrumental quartet with ease.

More than 300 new Voices have been added to the Tyros5, including new brass, guitars, synth, electric pianos, and upright pianos. S.Art2 Voices are high-quality sounds that re-create the feeling of an actual instrument when performing.

The Tyros5 features a metallic silver body (titanium finish) that looks as if it were chiseled out of metal, giving it an exclusive, high-tech feel. Weve also given attention to the button operations and knob positions, so that people who are already familiar with Tyros can operate the new model freely and without worries.

Not only does the Tyros5 have new and high-quality effect types, including Real Distortion and Real Reverb, it provides beautifully designed panel displays, with highly intuitive controls - just like actual effect devices. These also include VCM (Virtual Circuit Modeling) effects that use the same technology as the professional-level processing on Yamahas high-end mixers.

A powerful Vocal Cancel function effectively cancels or suppresses signals like vocals and solos that play a central role in an audio file, allowing you to make your own "minus one" track and sing "karaoke" style with just instrumental backing.

Add Rhythm to your performances with Audio Styles - Yamaha Tyros5

A versatile high performance audio engine that gives you total control over your sound. - Yamaha Tyros5

The Tyros5 is capable of playing back and recording audio files (including performances using Audio Styles), and also possesses a range of audio manipulation features you can use to create "karaoke" style "minus one" tracks in the key and tempo of your choice.

Real Reverb is an improved version of the Reverb technology found in previous versions of the Tyros. New algorithms take a greater number of factors into account, producing smoother, more natural reverbs.

While digital solutions are increasingly prevalent in music production studios and performance venues, but older analog gear is still used to get the warm sound that digital effects typically cannot provide. VCM Technology provides accurate reproductions of the classic sound of such effects units.

Real Distortion effects are based on digital models of classic guitar amplifiers from the 1960s and 1970s. There are also digital models of legendary analog guitar effect pedals. The result meticulously reproduces the frequencies and dynamics of real distortion guitar sounds. With the new, intuitive graphical interface, youll feel like youre controlling the original amplifier!

Audio Link Multi Pad function lets you link your own audio files (sound effects, vocal phrases, and so on), and trigger them from the Pads as you perform.

With Tyros5 you can create up to three split points across the keyboard. Offering the flexibility to, for example, assign a different Voice to each zone. Tyros5's accompaniment styles can now be controlled by chords played in the right hand split zones, allowing you to play bass parts manually with your left hand.

Lock the panel to prevent any settings from being changed when you are away from the instrumen-the perfect function for the live performer.

Tyros5 features four Sub Out line-out connections that you can use to adapt your sound to any performance situation, whether it be sending a specific part to a powered monitor, or sending a different sound to the house PA

On the 6th November our 2 Tyros experts, Justin and Keith, attended the Advanced Tyros 5 training day in Leigh. Its very important to us as a shop that the Tyros 5 is well received by the keyboard playing community. Justins views are below

539 styles - all the audio styles are different to the ones on S950 - all styles will be different - even those with the same name. example 60's guitar pop - same name but sounds incredibly better.

- registrations from Tyros4 will sound better on Tyros 5 even though using same sounds and styles because of the huge difference in DSP effects and the styles as previously mentioned.

- sounds like one of the latest clavinovas - lots of new piano sounds including s.art upright piano's and 2 octave latin piano's.

Vintage keys pack that was on T4 SE is better on T5.

Chord detection - previously it has not been possible to seperate chord detection so that now you can play chords in the right hand that the accompaniment will be deriven from with a bass in the left hand which does not affect the chord pattern - Uses - especially useful for people accompanying themselves or another person singing or wheres there is something else playing the melody line other than you.

The organ section is incredible , where previously organ enthusiasts have found it necessary purchased organ sounds from third partys or premium packs for iconic organs such as Wurlitzer, Wersi ,Lowrey , now those sounds are so impressive its hard to imagine anyone needing to do that , in addition the classical organ sounds are simply stunning , even if classical organs wouldn't normally "float your boat " they are now so good it makes you want to play them. There are also theatre organ pedal voices which are used in the new theatre organ styles but also can be used independantly for those of us who can still play with our feet ! There is also a free play theatre organ style which is very useful if you want the same effect as playing an organ with pedals.

This is one of the most important and exciting developments on Tyros 5 , its also the most different to get across without you hearing it but suffice to say that the end result creates an unprecedented realism which works particularly well in the following areas :

reproducing the effect in an incredibly "human" way of :

Its important to realise that whatever your ability you can really benefit from this feature , it will blow you away !

We had great guitar sounds on Tyros 4 , of course there are a lot of new fantastic guitar sounds on Tyros 5 but what is really missing is the guitar amplifier , if you are a guitarist you will understand that the key component in creating an iconic guitar sound is the amplifier that the guitar is played through . This is a great new feature on Tyros 5 , you can take an existing guitar sound and depending on what amp you put it through the differences can be dramatic, whether you plug it through a classic 60's VOX AC30 , a Marshall 4 x 12 o, a Mesa Boogie or a Roland Jazz Chorus makes an incredible difference , its also nice and simple because the image shown on the screen is exactly as it would show on the Guitar amplifier, if your not familiar with guitar amps you can just twiddle the knobs in front of you and you will hear the difference.

If you play keyboard style normally , in other words with a fingered chord or a single finger chord in the left hand , you may be tempted to think that because you don't play piano style then you don't need the extra keys, maybe you've said to yourself "I've always had 61 keys and never felt that I needed any more so I'll stick to 61" .

Here are some reasons why you should consider the 76 .

First, because the speakers are further apart the sound is better , in particular the stereo effects, the difference in sound is surprisingly prominent considering its around 8 inches different. Secondly, having an extra octave for your right hand melody is helpful , a low piano or a high violin , on the 61 key you might have to use the octave buttons to get the same effect, that of course means pressing a button , obviously its much easier if you don't have to press a button to get the desired sound. Lastly the option to have a second split is technically available on the 61, but you probably haven't used it because theres just not enough keys to give you a decent amount of notes to play on a different sound , on the 76 you could have a decent amount of keys to play say a piano sound up so far and then , say vibes for the rest of the way , again not having to press a button to change from piano to vibes , in case you're thinking that the vibes will be too high pitched, or maybe the piano is too low pitched , of course you can change the octave of each split area then save it into registration memory.

All in all considering the difference in price is relatively negligible the 76 has to be the winner in most circumstances, there will be some instances when you just have to stick with the 61 , for example we had one customer who stuck to the 61 purely because thats what fits across the back seat of his car, so in that case , fair enough !.